2011 sees the redesign of our website. Take a look around and let us know what you think.
email 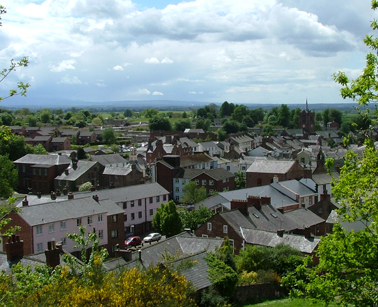 Brampton, with a population of some 4000, is built of local sandstone, and situated in a hollow formed by glacial action which took place during the ice-age.

In the centre of the town is the octagonal Moot Hall, built in 1817, with an external staircase to its upper entrance, pointed windows and a square turret. The building now houses the Tourist Information Centre. East of the town is an exceptionally large motte, about 135 feet high. On it is a statue of the 7th Earl of Carlisle.

St Martin's Church is famous as the only church designed by the Pre-Raphaelite architect Philip Webb, and contains one of the most exquisite sets of stained glass windows designed by Sir Edward Burne-Jones, and executed in the William Morris studio. The Old Parish Church, on the outskirts of the town, was built from stone from Hadrian's Wall, and was in use until 1878, when the new church replaced it. Only the Chancel now remains.

Talkin Tarn Country Park lies two miles south-east of Brampton on the B6413 Castle Carrock road. There is a 65 acre lake set amid 120 acres of farmland and woodland. The tarn is an ideal place for active recreation or a quiet stroll through the mature woodlands. 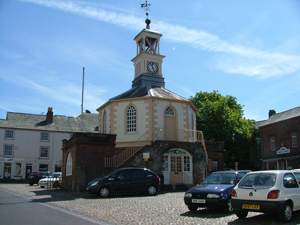 About two miles south of Brampton is Gelt Woods, a delightful walk, and also an RSPB nature reserve. In the woods is a rock with an inscription carved by a Roman soldier in the 3rd Century.

Hadrian's Wall is the most important monument built by the Romans in Britain. It stretches seventy-three miles from Wallsend near Newcastle, across the neck of England to Bowness on Solway in North West Cumbria. Within Cumbria are Banks Turret, near Brampton, and Birdoswald Roman Fort, a few miles away.

Emperor Hadrian - sited at the Western entrance to the town centre 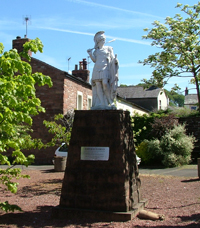 The town of Brampton, a name thought to be derived from the Old English word for Brambles or Broom, first began almost 2000 years ago when the Romans built a fort here and by the 7th century the Angles were living on the site. The early Christians were the next to visit and made their mark by building Brampton Old Church a mile outside of the existing centre near to the beautiful River Irthing. Brampton's importance continued to grow following the decision of King Henry to grant the town a Market Charter in 1252. As time passed Brampton once again played an important part in history when Bonnie Prince Charlie, en-route to London with his army of Highland Rebels stayed in Brampton during the siege of Carlisle. It is rumoured that the French Ambassador was quartered here before the army marched into Carlisle on the 17th of November 1745 and the Young Pretender declared his right to claim the monarchy of England and Scotland for his father. It was just one year later in 1746 that six of Bonnie Prince Charlie's men were hanged from the Capon Tree and a memorial to this event still stands in the town to this day. The late 18th century brought further prosperity for Brampton as the Newcastle to Carlisle Military Road was completed in 1758; the cotton weaving activities of this time and subsequent coal mining in the fells to the south of the town resulted in the building of most of the buildings still standing in its centre.